I am happy to introduce Students’ Den, a new section in our blog, that aims to give Public Health students the opportunity to elaborate on a  subject of their choice. We look forward to your comments and a fruitful discussion! Many thanks to Daniel Fuller for being the first author of this series!

The primary advantages of web-based questionnaires reported by the authors are improved response to questions, rapid response to surveys and reduced completion time, and reduced data entry errors. Responses to individual items on the survey are improved because the survey can be programmed to automatically provide prompts regarding missed questions or implausible responses. Respondents tend to complete web-based surveys more quickly and the authors suggest that for the same number of questions web-based surveys take approximately half the time to complete. According to the authors the disadvantages of completing web-based surveys are the relatively high nonresponse rates compared with traditional (i.e., interview and postal) modes of data collection and concerns regarding the reliability and validity of the data obtained.

While I agree with the authors regarding the disadvantages they suggest for web-based surveys there are other important limitations the authors have not discussed that are relevant for international public health research.

The first element is access to the Internet in terms of coverage. The authors present data showing that in developed countries such as the Norway and Germany coverage based on data from the Internet World Statistics ranges from 90.9% to 65.9%, respectively. However, the authors do not discuss differences in Internet access for developing nations. According to the Internet World Statistics the average Internet coverage for the world is 28.7% and ranges from 10.9% in Africa to 77.4% in North America. Coverage differences between countries are an important consideration when attempting to recruit representative samples via web-based surveys.

There are also important heterogeneities within countries. For example, the Australian bureau of statistics reports that “households are less likely to be connected to a computer, the internet and/or broadband if they have no children under 15 years; are located in ex-metropolitan areas of Australia; or have lower household incomes.” As a result, web-based questionnaires attempting to survey ‘hard to reach populations’ in particular respondents of low socio-economic status may be more likely to encounter selection bias. Thus, even in developed nations web-based surveys for social epidemiological research may be a long way off.

Returning to a national and international perspective, Internet coverage is not the only issue affecting the representativeness of samples in web-based surveys. Of particular concern are citizen’s rights to access content on the Internet. Obvious examples of Internet censorship include China and North Korean. However, even in the developed world laws are being put in place, or attempting to be put in place, that would limit citizen access to the internet. Reports without Borders, an organization dedicated to supporting press freedom reports that Australia has passed a law that would allow for nation-wide filtering of content on the internet (read more). In the United States the “Combating Online Infringements and Counterfeits Act” (COICA), if passed, would be similar to the Australian law. Access to the Internet, including researcher surveys that may contain sensitive questions (e.g., sexual history, illicit drug use) could be filtered. In fact, as van Gelder, Bretveld, and Roeleveld (2011) discuss, collecting data on sensitive topics is an advantage of Internet surveys because social desirability bias is reduced. However, these sensitive topics are those that may be targeted by filters. This potential filtering has research implications regarding representative sampling, but also has much more important implications about human rights and freedoms (For example, in Egypt this week the government ‘shut off’ the internet to quell decent (read more). 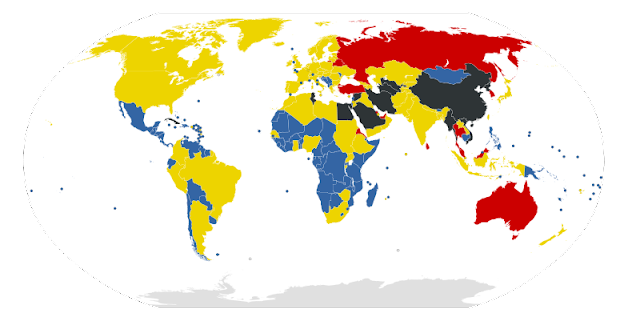 This is a file from the Wikimedia Commons and was created by 23prootie. It is licensed under the Creative Commons Attribution-Share Alike 3.0 Unported license.

In order to conduct web-based surveys researchers must consider the coverage of the Internet in their country, but they cannot ignore important heterogeneity of Internet access, which is associated with socioeconomic status, and potential censorship of surveys within countries. Public health researchers should be aware of the Internet censorship in their country and attempt to determine how this could influence surveys and be associated with health and human rights.