Imagine an ordinary day. You wake up, eat your cereal and off you go to work. Only you step into what seems to be an image from the apocalypse: there is thick smog everywhere, you cannot see more than 20 meters and have to dodge buses who have been trying to find their way for the last three hours. If this was a movie, it could be called airpocalypse. But this is not a movie. This was the reality for people in Harbin, China, a few days ago: 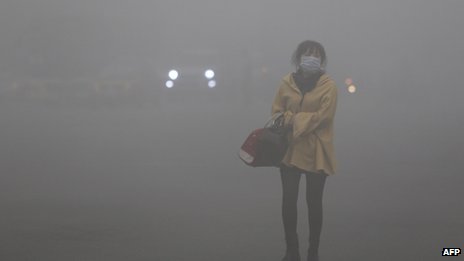 Harbin is a city of about 12 million people and it is not even one of the most polluted in China. Last week, the PM2.5 levels apparently crossed the 500 micrograms/cubic meter threshold (and sometimes even the 1000 micrograms/cubic meter) This is at least double of what is considered as emergency levels by the WHO (250 micrograms) and 20 times as much as is considered to be safe. For comparison purposes, the air quality in Central New York for today is predicted to be 35 fine particles. The reason for such high levels is thought to be turning on of the coal-powered municipal heating system for the winter.

The city reacted by closing down schools and the airport and stopping farmers of burning the cornstalks in their fields, amongst other measures. Is that enough though? With studies showing drop in life span due to pollution in China and more than one million of premature deaths, some experts things it is not, however encouraging compared to past policies.

What do you think? Are the measures taken enough? What else can it be done? Would things be different if such levels were recorded in the western world? And would you go on holidays there, given the chance? (should you decide to do so, this twitter account will give you regular updates on the PM2.5 levels in China).